Neil Finn, we salute you

The great and good Neil Finn released his latest album, Out Of Silence, last week. It's remarkable for a bunch of reasons, not the least of which is the fact it was recorded live as the culmination of a series of four global webcasts. (Go here for a nice feature on the making of the record.) 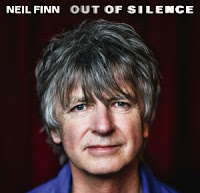 As is usually the case with Neil's work, it's phenomenal. Gorgeous beyond belief. I could go into more details, but this isn't a record review. This is just a tribute.

"You get to follow Neil Finn!"
Last year, The Mike Benign Compulsion was fortunate enough to share a bill with Neil at Milwaukee Summerfest (thanks again, Scott!). Truth be told, he played right before us, which was beyond strange. He was what's known as an "afternoon headliner:" a smart strategy by festival organizers to get people on the grounds earlier in the day.

For the four of us, watching Neil's performance from backstage was a pretty heady experience. After all, we see ourselves as proud descendants and disciples. Neil's one of our heroes. Not just because of that voice and those songs. Or because of how much we've loved Crowded House since their inception...or how much we dug Split Enz even before that.


Neil's a hero because he consistently and fearlessly reinvents himself and his music. He's written his own blueprint for how to be a songwriter and artist. He seems like a way decent human being, too.

No doubt there's enough Joe, Paul, Mike and Mike in any Mike Benign Compulsion song that by the time it reaches your ears, you don't hear how much we've lovingly taken from Neil Finn. (Though if you listened to one of my home demos of a new song, you'd hear my thievery loud and clear.)

"Who are your influences?" asks the lazy interviewer
During interviews, bands rightfully cringe at the question about their influences. That's because it's generic and lazy: a sign that the interviewer didn't give a shit enough to invest a few minutes ahead of time to come up with something better.

Generic and lazy question notwithstanding, when asked about our influences, Neil's solo work and the wildly underappreciated and supremely terrific Crowded House are always at the top of the list.

And so we salute you, Neil Finn. Thanks for continuing to do what you do, and for continually finding new and inspiring ways to do it.


Posted by The Mike Benign Compulsion